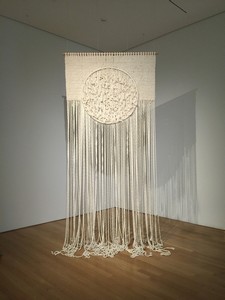 Sally England is a fiber artist currently living and working in Ojai, California. Raised in the midwest, she received her BA in Communication Arts from Grand Valley State University in West Michigan, and later attended PNCA's Applied Craft & Design MFA program in Portland, Oregon. During her time in graduate school in 2011 she was inspired to further her work in soft sculpture and explore a new form of macramé (knot-based textile construction) for who we are today. Her ensuing large-scale modern macramé work using thick cotton rope became a catalyst for the recent revival of the craft, inspiring many to learn or relearn the art of knotting. Her fiber-based installations and hangings have been presented in exhibitions and environments in the U.S and abroad, as well as in numerous online and print journals. In 2016 she had her first solo exhibition at The Grand Rapids Art Museum, titled ‘New Knots.’