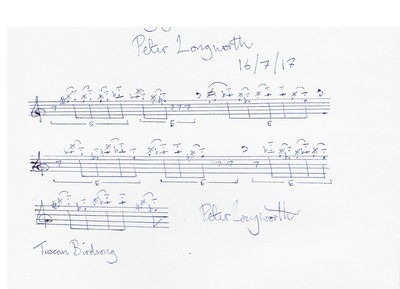 Peter Longworth studied composition at the Guildhall School of Music and Drama and at the Royal College of Music.
Peter's music has been performed internationally in countries including the United States, Canada,Japan, Germany, Switzerland and the Netherlands, as well as in British venues such as the Southbank Centre, the Queen Elizabeth Hall, the Cadogan Hall, the Glasgow Royal Concert Hall,St Martin in the Fields and St John's Smith Square. Ensembles who have performed his work include the London Mozart Players, the National Youth Orchestra of Scotland, Carnyx Brass, and members of the London Philharmonic Orchestra.