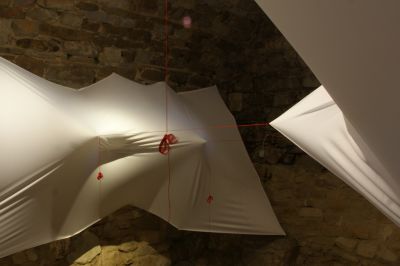 The primary concept of the proposed exhibition is the illustration of tension as a catalyst of reflective moments. More precisely, in the case of the proposed installation, I will use the physiological tension of aesthetic display and illumination to stimulate viewers toward reflections on the ageless identity question of "Who am I?" or "Where am I?"
At the source of my preoccupation with identity and the role that tension plays in shaping it is in my own journey. Born in Korea where I lived through adolescence, I had to good fortune to be exposed as an adult to two other and different cultures, Japanese and American. The amalgamation of all three cultures has fueled my passion for exploring artistically the many tensions involved in confirming one's cultural and personal identities. Philosophically, I see identity, and the quest to understand it, as a series of contentious pushes and pulls. I found myself, for instance, torn between wishing, on one hand, to escape the "hold" that my native culture has on me and the many and inexplicable pulls that keep bringing me back. In like manner, I reach out to belong to the American culture only to be me met with inadvertent push backs to deny me full acculturation.
I use my own work to reflect on life, its identity, as a tug-of-war of contentious forces. I use my work to invite viewers to reflect on the many tensions surrounding us. The installation draws attention to tension, through its physical and artistic foundation, providing an experience with a cognitive outcome; a chance for the viewers to remove themselves from their daily routines and to reflect on life and its many tensions.
TeaYoun Kim-Kassor is originally from South Korea where she received her B.F.A. in Fiber Arts. She continued her research in Art Education as the Japanese equivalent of a Fulbright Scholar at Saitama University in Japan where she earned an M.A.T. In America, TeaYoun continued her exploration of fine arts in the M.F.A. program at the University of Tennessee with a focus on installation. Currently, she is teaching as an Assistant Professor of Art at a Georgia College in GA, U.S.
FaLang translation system by Faboba