La Macina di San Cresci, established in 2001, is a place for creation, presentation and documentation of contemporary art in all its forms.
It is a member of RES ARTIS, the largest existing network  of artist residency programs numbering over 700 members drawn from more than 85 countries.

Mission :
We believe art and offer artists an opportunity to work for an extended period of time in a social environment that is quite different from the urban milieu that is the usual context of production and distribution of the contemporary arts. This new experience provides artists with a major stimulus to experiment with new ideas, approaches and modes of production, encouraging artists to rethink and renegotiate their role in such unfamiliar social contexts. It also invites communities to be receptive to creative practices that don’t conform to traditional expectations.
Our mission is to encourage the mobility of artists interested in exploring their ideas in a well appointed studio far from home; to develop a cultural exchange at local, national and international levels through the involvement and participation of foreign institutions, both public and private; to be a laboratory of experience where artist-teachers and young artists can work together. 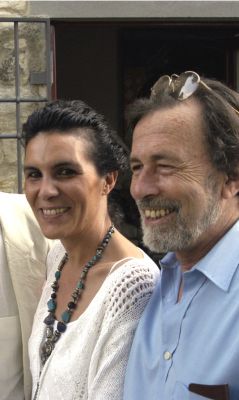 Duccio Trassinelli
Professor of Methodology of Design at the  I.S.I.A.  (Institute of Industrial Design) in Florence , for a decade.  In 1970, he founded  the " Studio A.R.D.I.T.I." , beginning to take an  interest in the field of interior design. With the other members of the  group, he developed objects  with original features and a new philosophy of use, some of which have been shown in numerous national and international exhibitions.In 1973,  the magazine "Bolaffi Casa" bestowed its "Design of the Month"  award upon the armchair  " Memoria" , manufactured  by Cassina in 1972. Memoria has  been shown  at the  Eurodomus 1972 15th Milan Triennale, the 2008  Milan Triennale "Made in Cassina" , and is in the  permanent collection  of the  Museum of  CASSINA.
Trassinelli was among the first to experiment with  low-voltage suggesting lights that not only illuminate, but also  play with surfaces and space; The B.T.2 and Ponte lamps are  in the permanent collection of the MoMA, NY; the Prismar lamp at Centre Pompidou, Paris and Vitra Design Museum , Germany.
His activity in Industrial Design has been and it is very heterogeneous.
In collaboration with the companies ANIC and BAYER, he developed worked electrical systems for prefabricated structures.
In the field of engineering, he developed  electronic tools for Officine Bettarini and in the transportation  field,  he designed  the  ATM city buses in Milan, manufactured  by Officine BREDA, Pistoia. he designed the  first magnetic  reader with separate keyboard for SOLIS  ELECTRONIC.He has worked with numerous public and private entities including designing a range of urban furnishings  for the CITY OF FLORENCE. He has many domestic and international patents.Trassinelli is an avid traveler and photographer.
www.ducciotrassinelli.com

Demetria Verduci
She attended the University of Architecture in Florence. She  worked for many years with several firms as a free-lance architect. Since 1985 she partnered with Duccio.